The efficiency of industrial processes is a complex and delicate process, aimed at: optimizing performance; eliminating inefficiencies; reducing set-up times and, above all, improving quality and safety.

An approach based on simulations allows to obtain significant benefits by increasing the probability of success of the innovation path, because it allows the exploration of numerous scenarios and a preventive evaluation of the impacts even before undertaking costly and risky changes to the production apparatus.

The software solution proposed by Siemens, Tecnomatix Plant Simulation, allows for the simulation and optimization of production systems and processes and facilitates the creation of digital models of logistics systems in order to analyze their characteristics and optimize their performance.

Industrial problems and methodology for solving them with simulations

To remain competitive, companies must design production systems that not only produce high-quality products at low cost, but also allow for rapid response to market changes and consumer needs.

Identifying errors in the planning phase is more beneficial to a company than doing so after a project has begun. Simulation provides a comprehensive perception of the process or product being studied, allows for multi-criteria analysis, and testing of many scenarios to assess whether the project has been planned correctly and will be executed in the right way.

A simulation study is performed using the following steps:

Check the real-world installation we want to model and collect the necessary data to create the simulation model.
Make the simulation models based on the objectives of the simulation studies.
After that, perform the experiments. This will produce a variety of results, such as how often machines fail, how often they are blocked, the set-up times accrued for individual stations, machine utilization, etc.
Interpret the data produced by the simulation.
Finally, the company will use the results as the basis for its decisions on optimizing the actual installation.
To perform a simulation, the following questions must always be kept in mind: 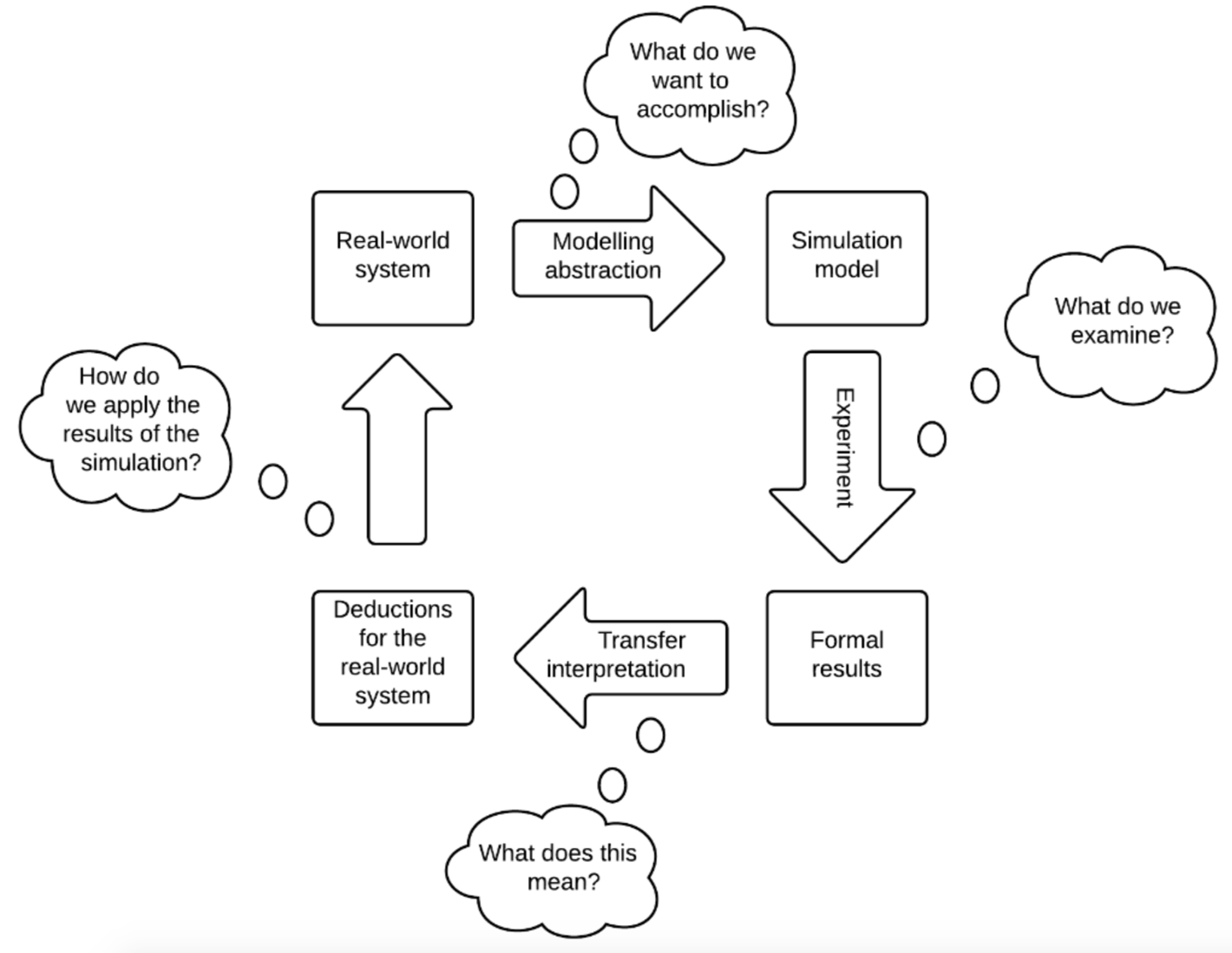 Tecnomatix Plant Simulation is a non open source software that does not allow the link between simulation models, but allows an excellent representation of energy profiles at all levels of the production process. Plant Simulation offers an extensive library of preset objects, such as:

a single process station;
A conveyor;
a warehouse;
In addition, the programming language within it, SimTalk, is Object-Oriented (OO). OO programming allows to define objects that are able to interact with each other through the exchange of information, thanks to the implementation of specific logics.

Such objects are equipped with:

inheritance;
polymorphism;
hierarchical structure.
The inheritance allows each object to maintain the characteristics of the so-called Class of belonging. All the Classes are contained inside the libraries of Plant Simulation.

Every object, used for the construction of the model, belongs to a determined Class and takes the name of Instance. The existence of a hierarchical structure means that, modifying the characteristics of a single instance, those of the belonging Class remain unchanged. Finally, polymorphism is related to the concept of inheritance and refers to the fact that a method, or, in general, a property of an object, defined within a Class, can take different values or return different results depending on the instance in which it is called.

Because of the dynamic nature of the simulation model, it is important to hold trace of the simulated time. In Plant Simulation this happens thanks to an object called Event Controller. It is a simulation clock, which is initialized every time the simulation is started and which coordinates the events that occur.

By clicking on the “Time” button you can decide whether to start a simulation on a specific date or simply at zero time. The specific date can be set in the Settings tab. The duration of the simulation and the warm-up time, which indicates the end of the transient, at which time the software can begin generating the required statistics, must also be defined.

For the evaluation of the simulation, statistical data collected from all the objects that make up the represented material flow are needed and, in order to have a correct estimate of the different variables that are intended to be examined, it is necessary that the relevant statistics are produced only after the system is filled. 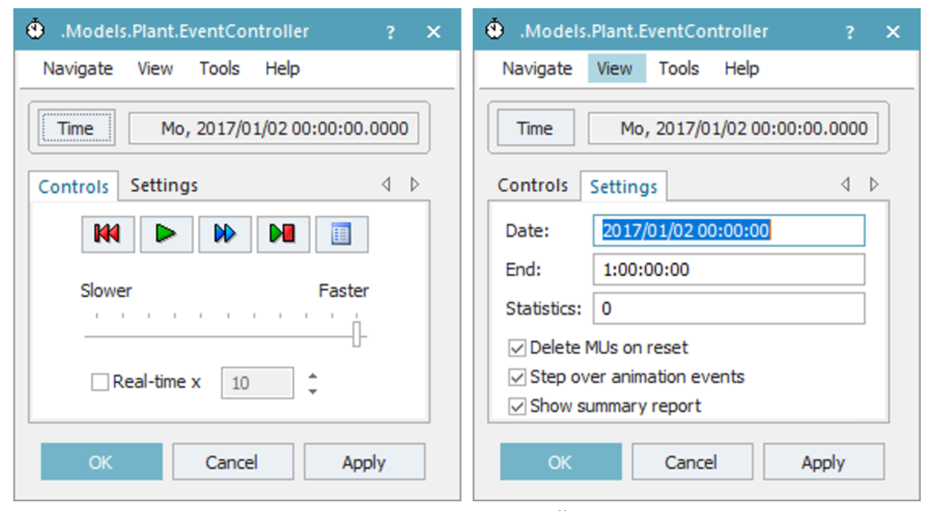 The Controls tab of the Event Controller (Fig.2) contains the commands to:

start;
stop;
reset;
establish the speed of execution.
When an entity enters a workstation, Plant Simulation calculates the time it takes for the entity to be processed and records that event and time within this list. The entire simulation model is initialized at zero time with a main method called “Init” that calls the entire initialization routine.

At zero time, in addition to initializing the system state, all statistics are reset to zero. As the simulation time progresses, the different events are carried out and eventually, at the end of the simulation, a report is generated showing an estimate of the system performance measures. The simulation model is formed from objects that interact one with the other while the simulation evolves in the time. Every object contains:

data, that they describe the state of it in a determined moment;
methods, that describe the actions that the object executes when determined conditions are realized.
Central, in the use of Plant Simulation, it is the toolbox (Fig.3), from which the various objects can be selected and dragged inside the area of job, said frame. Inside the toolbox, one can represent the different processing machines that the various production lines, which in turn combine to represent the entire plant.

Each enterprise can be decomposed into different hierarchical levels, the last level of which is formed by the machinery that performs the processing on the products. Through the “Material Flow” objects, it is possible to represent in detail all the elements of the production flow, such as workstations, roads, means of handling, etc.

Double-clicking on any object in the toolbox opens a dialog box that allows you to enter all the information and specifications of that object (fig 4). Very important is the graphical animation, in how much some problems of the examined system cannot be found only with the reading of the statistics of output, but it is necessary to observe carefully the model during the execution of the simulation. In this way it is possible:

display a graphical layer if bottlenecks arise;
if a station fails;
if there are points in which the system empties too quickly causing a wait due to lack of load on the stations.
Moreover, during the execution of the simulation, it is possible to visualize statistics and dynamic graphs, necessary, for example, to keep under control the quantity of entities present in a buffer between a station and the other. All these tools facilitate the analysis of the model and the relative output data. 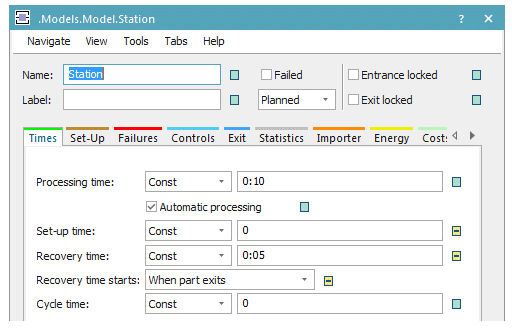 In this case study, the assembly/production system is tested if there is room for upgrading or improving productivity. This means that for this example, the modified version of the system will be tested and compared to the base model of the system. The point is to find improvements that will increase productivity or decrease resources. The assembly/manufacturing system consists of: 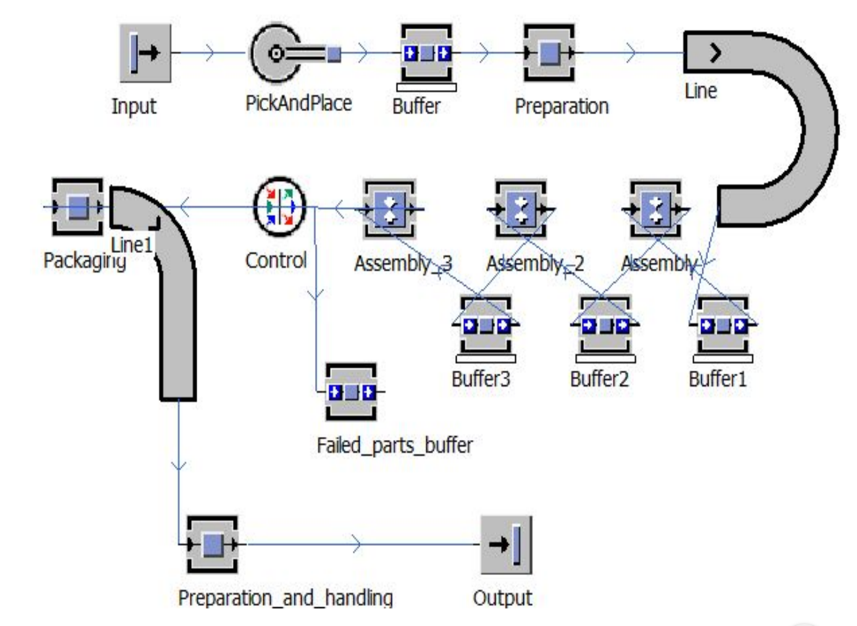 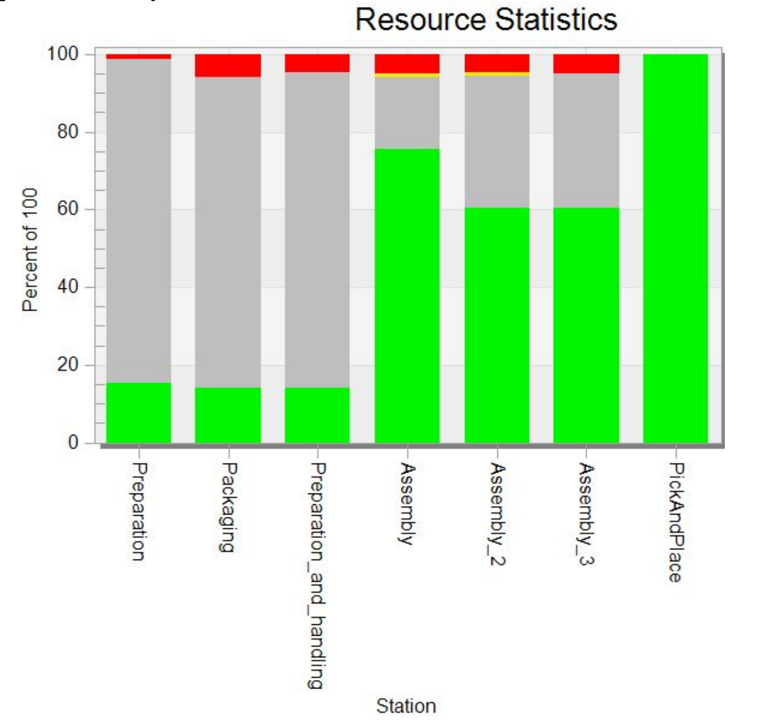 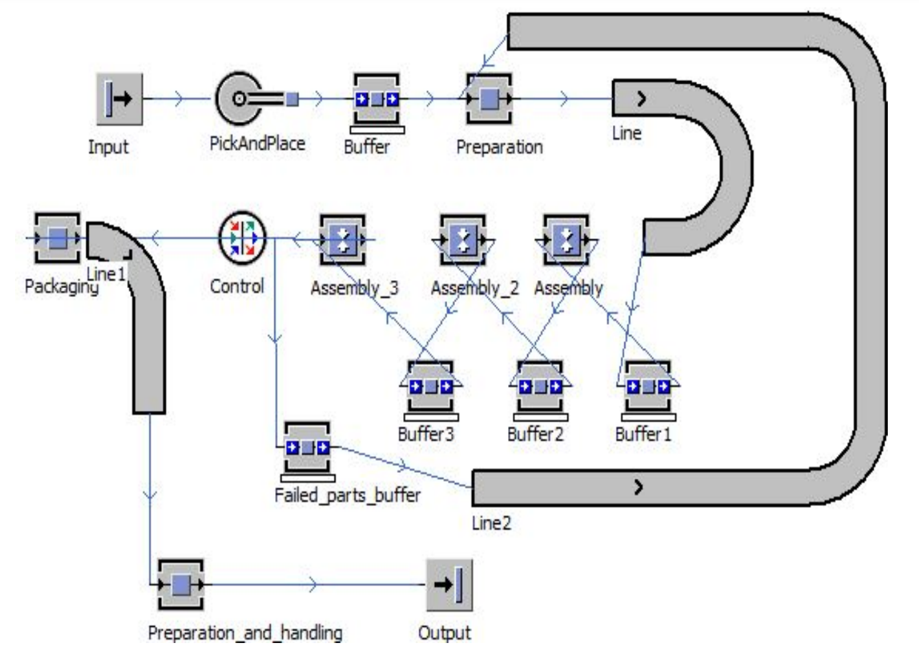 Fig. 7 New model of the system

The difference between the base model and the adapted model in Fig. 6 is that the buffer of the faulty parts is connected to the conveyor. Through the conveyor, the failed parts are again transported to the preparation station so that they are disassembled and ready for the next assembly process.

The simulation models generally operate at failure settings ranging from 95% of working time to 5% failure. In the pick and place mechanism, the 1% fail time was calculated based on the real model information. 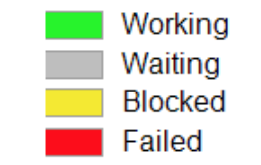 Based on Figures 7 and 8, we can see that the work time of the assembly stations increased just by managing the material flow and improving the pick and place and conveyor times. The cycle time of five working days was tested for productivity evaluation.

Computer simulations performed with the use of computer tools ensure the optimization of the work and performance of entire manufacturing plants, production lines, as well as individual logistics processes.

Moreover, thanks to the experimentation of various scenarios, it is possible to choose the better strategy guaranteeing the increase of efficiency and quality and lowering the costs of production.

The simulation experiment can be tested with different features and different types of modifications. It is a choice of the user when it is necessary to modify the base model or only some characteristics of the production model. The information obtained from the simulation results is affected by the accuracy of the input data and the model.

In summary, you can summarize the benefits offered by Plant Simulation in the following factors: The healthcare area is showing a huge interest towards Artificial Intelligence and especially for Machine Learning technologies capable to provide better instruments to the entire medical staff and a better customization of caregiving. The field of research is now... Smart Agriculture, or rather, precision agriculture, represents an innovative model for managing agricultural activities.It, through the use of sensors, translators and hardware/software systems, allows the reduction of the use of pesticides and the consumption of... Quantum information technologies and intelligent learning systems are both emerging technologies that will have a transformative impact on our society. The researchers looked into the question of the extent to which these fields can actually learn and benefit from... Reliability, punctuality and efficiency are some of the distinctive characteristics of successful businesses which, in order to maintain high standards, adopt advanced techniques for quality management. Using AI allows you to have more control over processes and... What are chatbots? How can chatbots improve customer service? What is behind the functioning of a chatbot? In this article we will try to answer these questions, also providing a practical example of how an automated dialogue software can be integrated in a real...

How to deal with the lack of data In applications such as Industry 4.0, the available data does not always meet the needs of the complex algorithmic structures or report correct labelling. This is why synthetic data is used to... Audio analysis is very important today since most interactions consist of interactive voice supports. The main information extracted from the audio is the semantics, that is the meaning of the concepts expressed. Some areas of application are:- voice recognition, for...

Set the digital strategy for your business